THE MONOCHROME SET
The Stranglers' third album Black and White has become a classic, just as the band that recorded it are, not before time, finally being seen as a classic rock band.

I’ll always love The Stranglers. Next to the Sex Pistols and The Skids they were the first punk/New Wave band I really liked (all the S’s… I wonder if that’s significant?). The latter two are long gone – apart from infrequent reunions – but The Stranglers have been around so long now, from 1974 all the way through to 2016 with members that have come and gone, that in modern terminology they’re a brand rather than a band.

Time was it was incredibly unfashionable for a band that emerged from the late ‘70s punk wars to last so long. Lazy, and in a lot of cases prejudicial, journalism would have it that The Stranglers should have packed it in when guitarist and vocalist Hugh Cornwell left in 1990 (that was 26 years ago, and it matters little now). Long before that, from what I remember, other journalists were calling for them to give up after the punk pop of Rattus Norvegicus and No More Heroes gave way to the challenging, less accessible but, for me, ultimately more rewarding prog-punk of 1978’s third album Black and White. Critical dismissal was pretty much the case with every LP they released after that. Still around 42 years on from when they formed, The Stranglers are the band that have proved you don’t need the press to be popular – even more the case in these social media days.

Referring to vintage television, a friend of mine recently said that there’s no such thing as the past anymore. That’s equally true of music: pretty much everything’s available and listenable. That context meant that on The Stranglers’ 40th anniversary tour, songs like ‘Hanging Around’ and ‘Still Life’ didn’t seem like they were recorded 18 years apart, and sounded as fresh as when they were first performed. Even though the new way of experiencing music has eliminated the fabled generation gap – anyone remember looking for pop records more than ten years old in your mum and dad’s record collections in the 1970s? – it’s done The Stranglers no end of favours, with a sound that is timeless, melodic and anti-establishment. The audience held people as old as 60 and as young as 20 (and maybe younger).

Black and White is why myself and friend Mike were at the O2 (formerly Brixton) Academy on Friday 11 March. For some time, it’s been the vogue for bands to perform seminal albums in full, and a few years ago The Stranglers did 1977’s Rattus and Heroes at Chalk Farm’s the Roundhouse. That was a memorable night: Dave Greenfield’s keyboards kept packing up and the band started their set three times. Bassist JJ Burnel wryly commented, ‘It’s worse than 30 years ago.’ 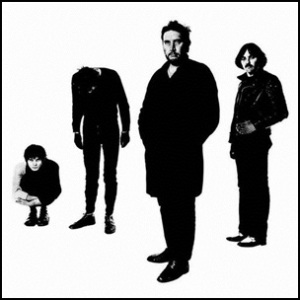 This time around, there’s no such endearing unprofessionalism. Black and White’s cover picture was a high contrast photograph of the four band members against a white background (left); the 2016 tour’s stage set reflected that with simple, white platforms to house the drum kit and keyboards, with stark beams of white light against which the black-clad Burnel and Baz Warne, the latest guitarist/singer, loomed like menacing silhouettes. The sound mix was pin sharp.

The album is a fascinating mixture of The Stranglers’ bleak 1978 worldview and their personal experiences. Industrial unrest, the posturing of both sides in the Cold War, nuclear meltdown and the rise of the Far Right haunt ‘Rise of the Robots’, ‘Curfew’, ‘Enough Time’ and ‘Death and Night and Blood’; constant touring, Hell’s Angels and a doomed love affair are translated into the ferocious ‘Tank’ (the set opener) and the curiously biblical-sounding ‘Nice N’ Sleazy’ and ‘Toiler on the Sea’. Add to that the nightmare psychedelia of ‘In The Shadows’, paranoia of ‘Sweden’ and ‘Threatened’ and nihilism of ‘Do You Wanna?’, and perhaps you can understand why such a dark, exotic brew appealed to an innocent young man when I discovered the LP in 1979.

Thinking about it, Black and White was the first rock album I bought (a not insignificant rite of passage in anyone’s life). Together with The Raven, it’s remained my favourite Stranglers album. As things have improved a bit financially for me recently, I was damned if I was going to miss them performing it in full. There was another reason for going: Mike’s fiancée passed away last year and the last gig they both went to, in Guildford – as we’d often done – was to see The Stranglers. Mike wasn’t ready to see them there this year, so that’s why we were in Brixton, sharing good memories and our enthusiasm for one of our favourite bands. Friday was suddenly all the more poignant because support band The Alarm’s singer Mike Peters revealed that he’d suffered from the same cancer as Mike’s partner and, having been in remission since 1995, had started the Love Hope Strength Foundation to raise funds and awareness for cancer sufferers.

Black and White was performed immaculately. Friday was so good that we decided we would go and see The Stranglers in Guildford on the following Monday. I was pleased, because I knew it would be cathartic for Mike. By the time Monday rolled round, with the flush of Friday night drinking faded, I wondered if it was such a good idea – expense, a school night, etc., all those middle-aged things you think are important.

I’m bloody glad we did go. If Friday was a good night, Monday was a great night. From the moment they took the stage, The Stranglers were on the attack. I’ve always preferred smaller venues, even though the O2 Academy is hardly an enormodrome, but I’ve never seen a bad gig in Guildford’s G Live. The bass was so loud it rattled the bottles in the bar, those strange, jazzy guitar chords perfectly counterbalanced tour drummer Jim Macaully’s drums that snapped like angry crocodiles, and the keyboards burbled and swirled as distinctively as ever.

With the Black and White set completed, the lighting became more vivid and colourful as ‘Grip’ crashed in, reflecting the frenetic pace of favourites like ‘5 Minutes’, ‘Something Better Change’ and – a personal favourite I’ve never heard them do before – ‘Go Buddy Go’. Mindful that a lot of people follow them around on tour, The Stranglers have the good grace to vary the set from night to night. On Monday, they swapped ‘I’ve Been Wild’ and ‘Mercury Rising’ for the equally powerful ‘Lost Control’ and ‘Freedom Is Insane’.

Like a couple of over-excited teenagers, high as kites myself and Mike piled onto the train afterwards and headed back to his place. During the journey, Mike was so up, he invited a couple of young students who’d been at the gig to his 50th birthday bash in July.

The appeal of The Stranglers is that they’re battered, defiant, unbroken and have ultimately been vindicated. For men of a certain age, that’s something we can all relate to.

Long may the brand continue.

Posted by Robert Fairclough at 02:13 No comments: