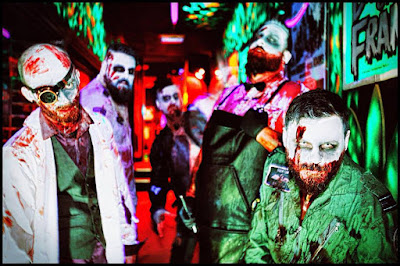 You can’t fault the quality and drawing power of these events. This time, myself and Lurch arrived only slightly late, but the place was packed for the very first act, Danny R.

I’d seen Mr R a few weeks ago at the Dock Tavern in Gorleston – another great venue for live music – and was impressed with him then. His acoustic guitar style and vocal style reminded me of Peter Green-era Fleetwood Mac (and apologies to Danny if he thinks I’m way off with that comparison). Anyway, for the second time around he held my attention throughout, even though I’m not a huge fan of the stool rock genre. The same was true of the equally accomplished CJ Brown, whose soaring vocal power has to be heard to be believed. 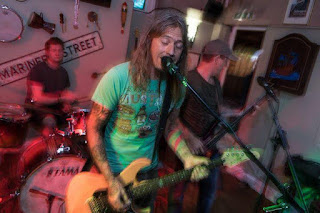 The real eye opener for me was Zipfels Barber (left); with a name like that, it was difficult to guess what you were in for. If someone told you Lowestoft had produced a first-rate grunge rock band you probably wouldn’t believe them, but this four piece are living proof that that’s the case. Like the best bands of that genre, the intense guitar work and propulsive rhythm section are offset by some infectious melodies and choruses. They could have played for a lot longer, as the audience definitely didn’t want them to go. I look forward to seeing a full set in the near future.

The Zipfels had to go as they had to make way for the glorious Bloodshake Chorus. I’d heard about this band for what seems like years but, thus far, they’d eluded me. I didn’t really know what to expect when a band resembling the slightly more punked-up zombie cast of Night of the Living Dead took the stage.

Cue an ominous, brooding, gothy soundscape that gradually resolved into… ‘These Boots Are Made for Walkin’’ by Nancy Sinatra. And there’s the Bloodshake’s appeal in a nut shell: grand guignol and highly entertaining cover versions of 1950s and 1960s standards, guaranteed to get the audience joining in from the first number, which their Facebook page sums up best as “the undead brain children of George A. Romero and Buddy Holly.” Club Uniquity may usually be reserved for original music, but the Chorus’s approach to cover versions is so novel that they more than qualify as innovative.

‘Mann Slaughter’, the band’s larger than life front man, is the focus for this arresting collision of horror and pop, orchestrating his minions – Wyatt Hertz (guitar), Squadron Leader Doug Upp (bass), Vincent Blackshadow (drums) and Professor Frank Ensteinway (keyboards) – with a nod here and a hand gesture there. Mr Slaughter also has a voice of incredible range and volume, as demonstrated on the ballad ‘I (Who Have Nothing)’, where he forsook the mic and could still be heard at the back of the club. When the Professor indulged in a keyboard solo, Mr Slaughter took a seat in the audience – I say seat, as it was my knee – before moving on to a more comfortable human sofa and barrage of eager selfies.

The set list couldn’t be faulted, with an apocalyptic ‘Ghost Riders in the Sky’, compulsory singalong in ‘Sunny Afternoon’ and the riotous closer of ‘Delilah’. This time, the Bloodshake Chorus really did leave the audience wanting more, as there wasn’t time for an encore. By far the best way.

Four diverse, equally brilliant acts on one bill and, once again, I marvel at how Club Uniquity can put on quality like this without charging an entrance fee. Make the most of it, people.

Posted by Robert Fairclough at 02:55