ALL THE WORLD'S A STAGE


BBC1's Shakespeare and Hathaway is the new Bulman. Really. 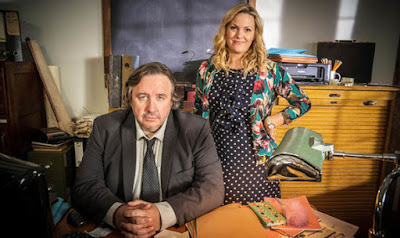 There’s some quality comedy drama hidden away in the afternoons on BBC1. It’s so good it could inhabit an evening slot currently occupied by the likes of flashier fare like Death in Paradise.

The premise of Shakespeare and Hathaway – Private Investigators is essentially the same as it’s bigger budget, late-evening cousin: quirky criminal investigators in a singularly distinctive location. While Ardal O’Hanlon of Death in Paradise is lucky enough to become embroiled in humorously-slanted crime capers on a Caribbean island, Jo Joyner (Luella Shakespeare) and Mark Benton (Frank Hathaway)’s duo, named after the Bard and his wife Anne, inhabit the more-budget conscious, culturally prestigious English town of Stratford-upon-Avon (Shakespeare’s birth-place). They are aided in their comfortable, easy to digest cases by Patrick Walsh McBride’s arch out-of-work actor, Sebastian Brudenell.

Shakespeare and Hathaway – Private Investigators is defiantly old fashioned as it’s the kind of programme you tune in for to see the banter between the characters, rather than for the plots. Stories such as the blackmail of the owner of a tennis club, the sabotage of an old people’s home and the murder of Lu’s con-man fiancee – which leads to her joining Frank’s private eye business in the first episode – are all pleasingly novel in their way, with some clever twists, but it’s the central characters that keep you coming back for extra helpings.

Take ‘Too Cold for Hell’, the last episode in the current series. The investigation of a series of thefts by removal men delivers a situation where the terminally perky, bouncily curled Lu and the overweight, lugubrious, ex-DI Frank impersonate a bitter, separating married couple. “Don’t buy your secretary thongs from Victoria’s Secrets then keep the receipts in your pocket!” snarls Lu in front of an embarrassed removal man, while Frank parries with “Don’t put your wife’s name on the deeds of the house YOU bought!” Later on, Lu pretends to be an Aston Villa supporter, comically interpreting Frank’s sign language telling her the score of last Saturday’s match – “One… Love...” – while Sebastian gets his traditional role in (almost) every episode of taking on a cover identity.Here, he portrays an unlikely BBC executive, pitching the sadly not unlikely new format of a TV quiz based in a tree house.

The supporting characters are equally enjoyable: no nonsense DI Marlowe (geddit?, played by Amber Aga), Frank’s ex-sergeant, who allows him liberal access to every crime scene, complemented by Tomos Eames’ wonderfully dour and straight-faced DS Keeler who, traditionally for this kind of thing, hates Marlowe’s old boss. Like every main character, they all get at least one great one liner per episode, but Keeler has a real gem here. Locked in a freezer with Frank and Billy ‘the Brick’ Porter (Ciaran Griffiths), he moans, “You actually think you’re gonna break out of here with a frozen fish?” In this episode, James Dreyfus joined in the fun as a Marbella-based gangster pursuing uncut diamonds. The series’ gimmick is to drop in quotes from Shakespeare, and you could tell Dreyfus enjoyed his turn, making a meal of “to sleep, perchance to dream” from Hamlet as he described a watery grave for Frank and co.

Free of any sex and violence because of the time slot, Shakespeare and Hathaway – Private Investigators unashamedly harks back to similar, vintage fare like Lovejoy, Pie in the Sky and particularly Bulman, in which, for all the roguishness or eccentricity of the protagonists, they had a heart of gold and the morality was clear cut. The tradition continues with S and H, where the grumpy Frank defends the petty thief Billy the Brick to Keller because the odds were stacked against Billy from the moment he was born to a junkie mother. In Lu, Frank and Sebastian’s office based in a period Tudor building there’s also – whisper it – a whiff of the offbeat ITC film series trios of Randall and Hopkirk (Deceased) and Strange Report.

So, there’s nothing particularly new about S and H, but the way its been set up by creators Paul Matthew Thompson and Jude Tindall, and performed by the likeable cast, make it fresh, lively and engaging. Time to brush up your Shakespeare.

Posted by Robert Fairclough at 04:35