45 years on, punk pariahs The Stranglers are better than ever. 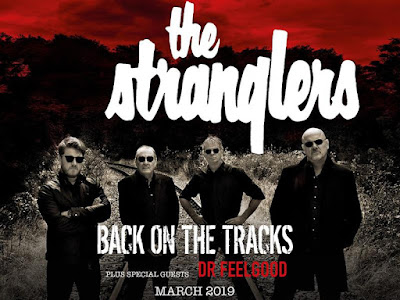 If it’s March, gallows-humour-intellectuals-masquerading-as-thugs The Stranglers must be on the road again. They first came to prominence in the Year Zero cauldron of punk in 1977, and I’ve been going to see them since the La Folie tour in 1981. My old school chum Lurch was among the fans on the coach trip I organised back then; thirty-plus years later, me and Lurch are still friends and we’re making what’s become, over the last three years, an annual March pilgrimage to worship at the altar of the meninblack.

It’s fair to say that me and The Stranglers have history. The last three decades have been a rocky time for them as well as for me, but, in our different ways, we’ve tried to weather the varying storms of relentless time. Gradually, over the last eighteen years, the perception of The Stranglers has shifted from punk-dinosaurs-who-won’t go-away to valued alternative rock innovators, whose continued live performances are events to be cherished.

It’s no coincidence that this critical rehabilitation – as well as a constant influx of new fans, if the many young faces in the audience at Rock City were anything to go by – is due in no small way to the presence of Mr Baz Warne, the mischievous guitarist and vocalist. He arrived in 2000 when the band were still a five piece with stand-alone singer Paul Roberts, re-energising the jaded New Wave veterans with his input to a trio of acclaimed and best selling albums – Norfolk Coast (2004), Suite XVI (2007) and Giants (2012). Today, songs from these records are greeted with as much enthusiasm as vintage anthems like ‘Something Better Change’ and ‘Duchess’. One of the highlights of the set tonight is a searing, explosive ‘Unbroken’, the opening track on Suite XVI.

In short, Baz is such a comfortable fit with the two remaining original Stranglers – low slung bassist Jean Jacques Burnel and keyboard maestro Dave Greenfield – together with ‘new’ drummer Jim Macaulay (he replaced original drummer and founder Strangler Jet Black on tour in 2013), that it feels like he’s always been there. Baz knows he belongs and he loves it, if the amount of delighted grins on his face and good natured V-signs he flips at the audience is anything to go by. There’s something in the band’s creative DNA that makes it natural for them to be a four piece – Baz and Burnel looming menacingly at the front, Greenfield in command of an arsenal of keyboards to the rear right and Macaulay keeping the beat at back left. 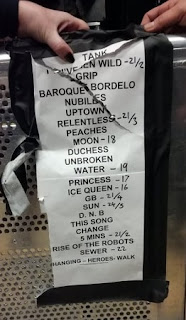 No matter how many times I’ve seen them, The Stranglers continue to offer some surprises. There are always reinvigorated gems from their back catalogue which haven’t been played in an age and this year is no different. The eerily symphonic ‘Baroque Bordello’ from the classic 1979 LP The Raven – arguably the best album by the band’s first incarnation, though Lurch will disagree – made a welcome return, while from the 1980s ‘pop’ era we were treated to a slithering ‘Ice Queen’ and a rousing, rockabilly-esque ‘Uptown’, both off 1984’s Aural Sculpture. (Topically, the latter featured dialogue sampled from the chump who is Trump.)

Of more interest, to me at any rate, were three new songs. From what I could tell, the first, ‘Water’, (debuted on the 2018 ‘Definitive’ tour), deals with ecological issues, and is the equal of anything on Giants. The two other new compositions – ‘Last Man in the Moon’ and ‘This Song’ – are in another league all together. The first is wistful and melancholic, while the second scales the gloomy heights of the melodic, misanthropic pop The Stranglers do so well. The last line, growled out by Baz as something like ‘I could get over you/If I really wanted to’, promises much for the forthcoming album that recent interviews confirm the band are now ready to record. Were ‘This Song’ to be released as a single, if there was any justice in the world it would go to Number One (if such things were still important).

Elsewhere, The Stranglers delighted us with sing-along standards like ‘Tank’, ‘Princess of the Streets’, ‘Golden Brown’ and ‘Always the Sun’, together with more left-field fare such as utterly ferocious renderings of ‘Hey! (Rise of the Robots)’ and ‘Down in the Sewer’. The encore closer – as is traditional – was the band’s signature tune ‘No More Heroes’, sounding as vicious and vital today as it ever has.

According to the set list they should have also played their epic version of ‘Walk On By’, but, going by the rapturous audience reaction – especially exceptional for a Monday night – no one at Rock City felt short-changed. By now all The Stranglers were grinning, and took to the front of the stage to do something that would never have happened in the era of the band’s first singer and guitarist, the aloof Hugh Cornwell: a group hug and a group bow. That’s how happy they are to still be making and playing music that’s loved and appreciated the world over.

The Stranglers: the band that no one thought would last who keep on giving. Who’d have thought?

Photo above by Lurch

Posted by Robert Fairclough at 01:19